Being a New York Rangers fan this season has been a rollercoaster ride of emotions. We were all up when we signed Shattenkirk in the offseason and thought our defense was going to finally help out Hank. Wrong. We started off the season with a 2-8 record. Horrendous. Unwatchable. Dumpster fire. Then we went on a year in the month of November winning 9 out of our 12 games in that month. Fans were back on board, not realizing our horrible defense in games were being masked by our beloved Henrik Lundqvist, what else is new? We had another good month in December but we started getting hit with injuries. Chris Kreider, the ghost himself went down with a blood clot. A very serious injury, one he is still recovering from. Don’t get me wrong I do like Kreider, I just think his stats don’t match up with his skill set. He underperforms every year and should be doing a lot more. It is what it is.

Enter 2018. We win the winter classic. Undefeated outdoors. Probably our biggest accomplishment this year. But ever since we’ve been a .500 hockey team. We’ve been lost on both sides of the ice. Lundqvist is getting lit up. Pavelec is getting lit up. Buchnevich, Vesey, Staal, Shattenkirk, Kreider. All out with injuries. We are depleted and going no where. Hank is determined to stick with this team and go down with the ship. The man deserves a cup. He deserves better. But it’s time to blow up the core.

Reports came out today that the Rangers asked Rick Nash to give them his list of teams he doesn’t want to get traded to. So it’s time. Rick Nash, the man who changed his whole game since coming to New York City and developed into this outstanding two way forward is going to be packing his bags. It’s upsetting because he is really such a special talent but after all it’s a business. Rumors that Michael Grabner is also on his way out. McDonagh, our “Captain” , might be heading to Tampa. There’s a lot of steam picking up with that rumor. People are calling and asking for a price on Zuccarello. The Rangers might actually blow it up and go on a full on fire sale. I think this is long overdue, it’s been due for about two years now. Build on the fly, take some notes from Cashman in the Bronx and make this happen. Do it for the man who has put this team on his back for over a decade and deserves a cup. Do it for our King. And you never know, Nash and Grabner could very well reup with the Rangers in the off-season. Nash loves the city and he doesn’t know how to break it to his son that he might not be able to root for the Rangers anymore. That hits the feels but wherever Nash goes I’ll be rooting for him. 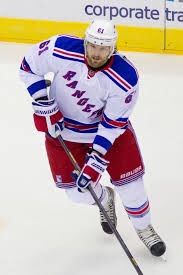