Oh how the “mighty” have fallen. I’ve heard nothing but how good and how Dez was a top 3 wide receiver in the league for years including last year. When I got the alert from ESPN this afternoon at work I laughed and chuckled like a little girl. Fuck this guy. I hate Dez Bryant more than any other football player. He’s overrated and a bum! I mean look at his stats he’s been on a ridiculous decline for like three years. How can people argue with me that he was better than Odell last off-season. Like get your head out of the sand and be realistic the guy was good for two years tops.

I mean he was great for three seasons. 2012-2014 was Dez in his prime but he fell off after that. Injuries, drops, you name it Dez had it. Not to mention he’s a crybaby little bitch on the sideline. He is the NFLs version of Sidney Crosby honestly. Not to mention all those domestic abuse charges SHEEEESH. What a guy. I’m happy he was released, maybe he’ll learn how to be a decent human being for a change. But Dez made it interesting on twitter for us. We all know how vocal and outspoken he is. So let’s try and decipher his tweets: 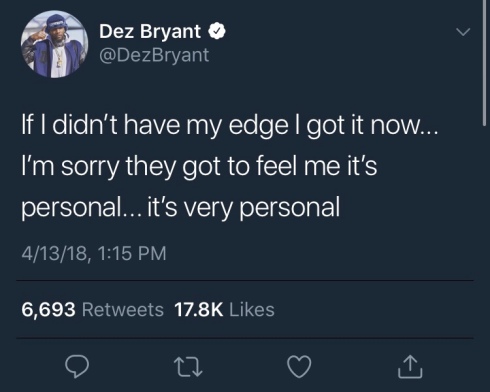 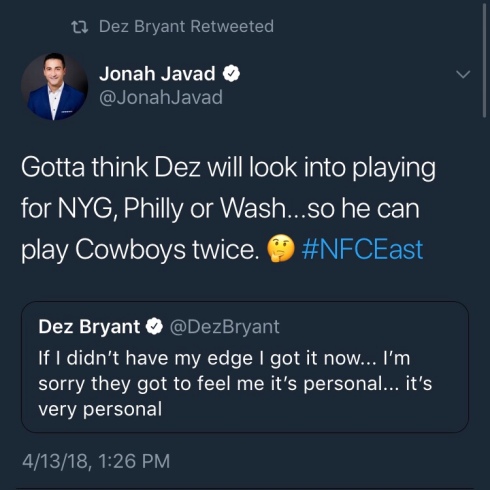 Lets start the process? Is that a hint at him wanting to go to Philly? He wouldn’t have to be the number one target there with Alshon Jeffrey lining up on the other side and he would have Carson Wentz throwing him the ball who is one thousand times better than Dak Prescott. Makes it even more believable with him retweeting the tweet in third picture. He also tweeted he’ll see Dallas twice this year and that’s is personal now. So he has a chip on his shoulder and he wants to stay in the NFC East. My two guesses is Philly is the heavy favorite and Washington could give him the money he’s looking for. I pray he doesn’t talk to the Giants. We tried this experiment last year with Brandon Marshall. That worked wonders, so I’ll pass on Dez. Other teams not in the division I could see him talking to are the Patriots and 49ers. Patriots will give him a year or two deal and he’ll probably win a super bowl there. Who says no? As for San Fran they can give him the money he’s looking for and help rebuild that franchise with Jimmy G. It’ll be interesting to see where Dez heads to next after departing Dallas. Hey Dez throw up the X bud, enjoy the offseason.