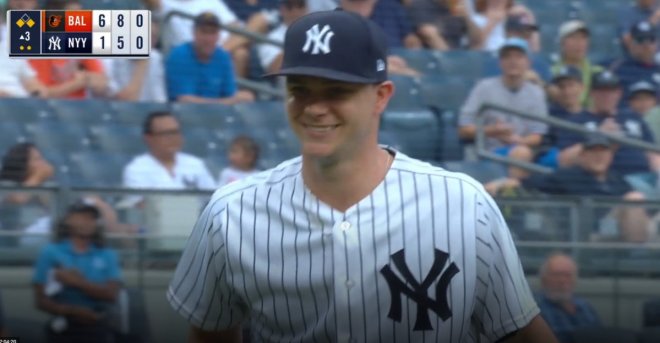 The Yankees dropped yet another game to the bottom of the barrel Baltimore Orioles. This afternoons loss is probably the worst of the worst when it comes to games against Baltimore. This loss splits the season series between these two teams at 6 games a piece. We are playing .500 baseball against a team that is 42 games under .500 overall. Ain’t that some shit? Not to mention we were up against a pitcher who was 3-13 with a 6.08 ERA entering todays game. And what did we do? Made him look like a god damn CY Young candidate.  To make matters even worse Sonny Gray got the start today at Yankee Stadium where he has been nothing less than atrocious. Like I’m talking absolute dog shit in the Bronx. I mean look at these stats, he is 4-3 with an ERA of 6.80…. This dude is legit going to be the death of me, especially after today.

Gray made quick work in the first inning and things seemed somewhat okay after an inning of play. Plot twist. Things were not okay, old Sonny Gray pulled a fast one over on all of us! After his dominant 13 pitch 1-2-3 first inning, he came out and got absolutely fucking shelled. It all started with a Danny Valencia single, followed by a Chris Davis walk. Trey Mancini would then lace an RBI single to center scoring Valencia 1-0. And here we go, cue the circus music because Sonny Gray is back to his usual clown bullshit… Caleb Joseph would reach on a bunt single to load the bases, still no outs by the way. Renato Nunez would then slap a double to right and making it official that the wheels have fallen off. 3-0 O’s. Gray would manage a strikeout and get the first out of the inning but don’t get too excited because he followed that up by letting up a two run single off the bat of Tim Beckham. 5-0 O’s. What a disaster.

✌️ @renato44nunez puts a couple more on the board. #Birdland pic.twitter.com/I9JUnDJ0lw

The Yankees did manage to get on the board in the bottom of the second. After the O’s hung five runs on Sonny, Gleyber Torres led off and absolutely demolished a 1-0 pitch to right field. Gleyber is indeed good. Can you believe we got him just by loaning Chapman to the Cubs for two and a half months. Bravo, Cashman. The homer cut the deficit to 5-1 but that’s all the Yankees would manage to muster up that inning.

Things didn’t get much better for Sonny Gray in the third inning. He managed to get the first two outs without an issue but it imploded as usual. He let up a bomb to Trey Mancini, 420 feet to center. At this point I’m beyond sick of your shit Sonny Gray. He then issued a walk to Joseph and then immediately after that let up a single to Nunez that advanced Joseph to third. Boone brought the hook out and yanked him immediately. Gray’s final line for the game: 2.2 IP 7 ER 3K’s and 2 walks. But what really sent me over the edge was the fact this shithead walked off the mound smiling. 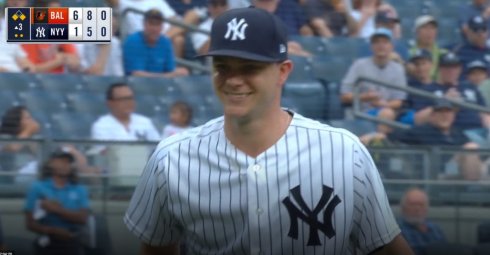 How can you have that douchey smile on your face when you just left the game after leaving your team in a 5 run hole. Send this guy Sonny Gray on a one way flight directly into the sun. I don’t want to see him in pinstripes anymore. I was so amped when we traded for him originally but I guess the joke was on me. He conned us. What a cock. But I guess because he walked off smiling while boos rained down on him like there was a god damn monsoon happening in the Bronx this afternoon he’ll be heading into the Hall Of Fame. His words, not mine.

The Yankees wouldn’t have much more success during the game on the offensive side. Andujar would continue to hit as he is on pace to be a heavy favorite as the AL Rookie of the Year, he would get an RBI single in the eight making it 7-2. They scored some runs in the ninth as well, thanks to yet another Gleyber bomb. Not just a normal bomb but a three run bomb with two outs. Cutting the lead to 7-5 but the rally was short-lived as Greg Bird would pop out to second immediately after to end the game. 7-5 and the Yankees lose.

A big bright spot in this game was Lance Lynn making his debut in pinstripes. He took over for He-Who-Must-Not-Be-Named in the third and was lights out for the Yankees. He pitched 4.1 innings, let up 5 hits. no runs and fanned five batters. Definitely a nice appearance and he saved the bullpen from having a long day which is key with us heading to Boston for a 4 game set starting tomorrow. Hopefully Lynn gets into the rotation and starts in place of Sonny next week. It will be a nice reality check for Mr. Gray and I think after today Lynn is more than deserving to start a game. But enough dwelling on this loss, let’s look ahead and focus on this crucial series against the Red Sox and as always…