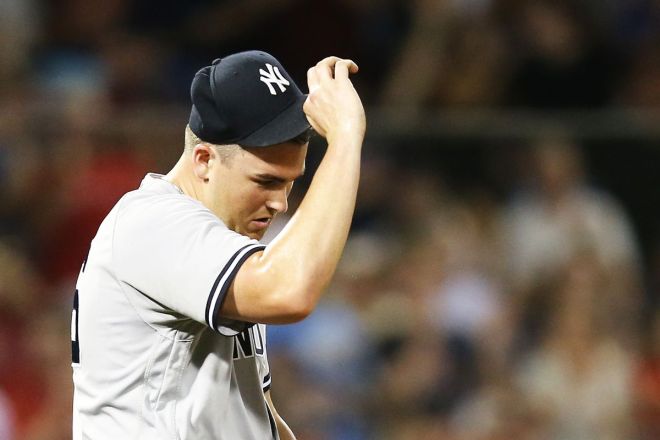 They say when it rains it pours. But instead of pouring last night at Fenway Park in Boston, it was a fucking monsoon. The Yankees got their asses smacked around like a bunch of whores in a brothel. It was unbearable to watch and actually made me very upset. On a night where the Yankees were supposed to step up to the plate against ace Chris Sale, which didn’t happen as he went to the DL two days ago. The Yankees went up against Brian Johnson and we threw out our trusty veteran CC Sabathia. So let’s recap this bloodbath of a game.

The Yankees jumped out to an early lead in the first inning, after Aaron Hicks reached safely on an error and Giancarlo Stanton singled. Didi Gregorius stepped up the plate. He proceeded to smack a 2-0 fastball to Guam. A three run shot over the midget bullpen fence in right center field. But I thought the narrative with Didi was he can only hit homers in the short porch at Yankee Stadium… wrong Bostonians. The shot put the Yankees up 3-0 and things were looking up. Aaron Hicks would tally on another run in the second inning. With two outs, Hicks crushed a solo shot to right field. Making it 4-0 Yankees. I was amped and I thought we were on our way to an absolute dominant win over the Red Sox. I was wrong, dead wrong.

Cue the bottom of the second inning where the wheels became loose and started to fall off. After letting up back to back singles to Ian Kinsler and Eduardo Nunez, CC struck out Swihart for the first out, only to follow it up with a walk to Brock Holt to load the bases… He did manage to strike out JBJ for the second out and the crisis is somewhat averted. Mookie Betts and more than likely the AL MVP with the season he is having, worked a 5 pitch walk that scored Kinsler. 4-1 Yankees. CC got Benintendi to fly out but the damage is just beginning as CC threw 36 pitches in the second, not good. Steve Pearce led off the bottom of the third with a solo shot to cut the deficit to 4-2 in favor of the Yankees. After another shaky inning by Sabathia who didn’t seem to have his command tonight, Boone opted to take him out after three innings with the vet at 77 pitches already.

To try and lighten the mood, please enjoy this clip of one the best throws to first base you will ever see, courtest of CC Sabathia.

Bottom of the fourth inning, the beginning of the end. Jonathon Holder came in to relieve CC and this would be all she wrote for the Yankees. An absolute massacre took place this inning. Holder would face 7 batters this inning and all 7 batters would reach base safely. Not the kind of appearance you would want coming into a game. Steve Pearce hit another homerun this inning, a two run shot, extra base hits galore by Betts, JD Martinez, Nunez. Holder was yanked after the Red Sox notched their 6th run of the inning and securing an 8-4 lead. Chad Green came in and the tide didn’t turn for the Yankees. After Green proceeded to get the first two batters he faced out, he also hopped onto the struggle bus that Holder was just thrown off of. An RBI double by Bradley and later an RBI single by Benny Biceps would run the score up to 10-4 and just like that Chad Green’s night was done and in comes Luis Cessa who managed to get the third out and end that nightmare of inning. An inning so bad I contemplated pouring Clorox Fresh Meadows bleach into my eye sockets because I truly believed that would be less painful.

Didi would lead off the fifth inning and hit a solo shot, 10-5. Woohoo, after that ass whooping in the fourth it wasn’t much to be excited for quite frankly. But like every pitcher to enter the game for the Yankees so far tonight, Luis Cessa decided to give the run right back, a lead off double by JD Martinez in the bottom of the fifth, followed by a wild pitch that moved him to third, only to score later on thanks to an Ian Kinsler double, 11-5 Red Sox. And I am officially dead at this point. The bottom of the sixth inning then came along and Cessa imploded like his brothers before him.  A one out single by Betts, followed by an RBI double by Benintendi made it 12-5. Next up Steve Pearce. Guess what? He hit another homerun, his third of the night. Each of his homeruns came off of a different pitcher. 14-5 Red Sox. This is abuse at this point. It’s like a car crash where you should look away but you’re so horrified that you just can’t turn your head and look at anything else.

The onslaught settled down a bit. The Yankees would score two more runs in the game by way of a Stanton solo homer and by a Stanton sac fly. Even Boston would tally one more run. Leaving the final score of this one-sided game 15-7. Thank god it’s finally over. Forget about it and move on to the next one.

Couple side notes before I wrap this thing up. Boone might be very clueless at his job and his lack of experience is showing. I think he should have pulled Holder right after the Pearce homerun. But he decided to leave him and get shelled for a couple more runs before going to Green. Still think the Girardi firing was immature but it is what it is. Cessa who came into the game for that hellacious fourth inning was scheduled to start Saturday. With that out of the question now, there has been rumors swirling that the Yankees are calling up Chance Adams. Sign me the fuck up for that. Sevy takes the mound tonight and hopefully he can rebound after having a terrible month of July. We need him now more than ever especially after abusing the bullpen in last night’s game. Anything has to be better than last nights murderfest. Turn this thing around please and let’s go Yankees.