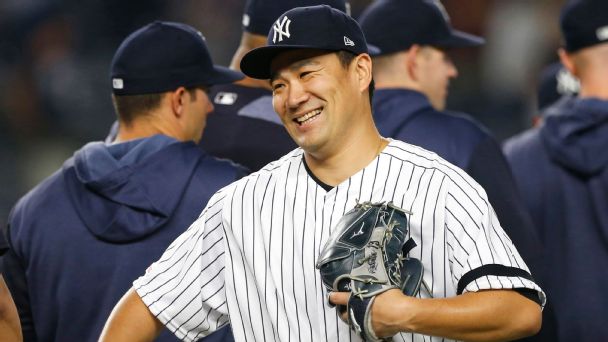 Masahiro Tanaka pitched an absolute gem last night in the Bronx. It’s rare for him to have that good of a start when it isn’t a September playoff game as of late but that was an outing for the ages for Masa. He pitched a complete game shutout with 11 K’s and one walk, he also only gave up two hits. He was fucking dialed in and I loved it. Gave the bullpen a much needed night off. This is the Tanaka that Yankees fans and the organization signed 5 years ago. Hats off to you Masahiro. Thank you for that start and thank you for keeping the momentum of this short winning streak alive.

On the offensive side of things for the Yankees, they scored their first pair of runs in the third inning. After a one out single by Cameron Maybin, who is playing out of his fucking mind for his job currently, Dj LeMahieu hit a first pitch slider in the middle of the plate off of Yonny Chirinos to deep centerfield and out for a two run blast. DJs eight homer of the season. LeMahieu just continues to prove why he was such a great offseason signing and the reason why he has won a batting title in the past. We are halfway through June and DJ is still batting .311 on the year. All this man does is hit!

The Yankees have now homered in 20 consecutive games, tying for the longest streak in the Majors this season. pic.twitter.com/qVWzt1DKpV

As I said earlier. Cameron Maybin is fighting for his job and he is making it unbelievably hard for the Yankees to DFA him. With Giancarlo Stanton and Aaron Judge on the verge of returning to action this week, the Yankees have already sent down Clint Frazier to AAA, Mike Tauchman just got sent down as well. Which leaves the Yankees with 5 outfielders when everybody is back. Aaron Judge, Stanton, Aaron Hicks, Brett Gardner and Cameron Maybin. Obviously Maybin is the odd man out here, Gardner is going to stick around due to his service with the team. Hicks, Stanton, Judge is going to be your starting outfield especially with the newly acquired Edwin Encarnacion taking up the DH spot.

Maybin is making himself a case to stay with this team. Literally doing his best Leo impression from The Wolf Of Wall Street. He ain’t fucking leaving. In the fifth inning of the game, Maybin took a 2-1 sinker that hung up in the zone and deposited it into the seats out in left field. He has now homered in three straight games. He’s great in the field. I would much rather keep Maybin instead of Gardner. Hate me all you want but ride the hot hand.

Three wins in a row after a rough two beginning of June. The big guns are coming back to the lineup this week. Hopefully Severino is close behind them. This team is going to make some noise. Currently sitting 1.5 games ahead of Tampa in the AL east and 5.5 games up on Boston. Hopefully this team at full health can continue to steamroll through teams. We are a Severino return and a trade for another solid pitcher away from being considered legit World Series favorites in my opinion. Fingers crossed I’m right on that. But regardless, let’s go Yankees.